Review: Timeline's Why Did Pontius Pilate Allow The Killing Of Christ? | The Man Who Killed Christ 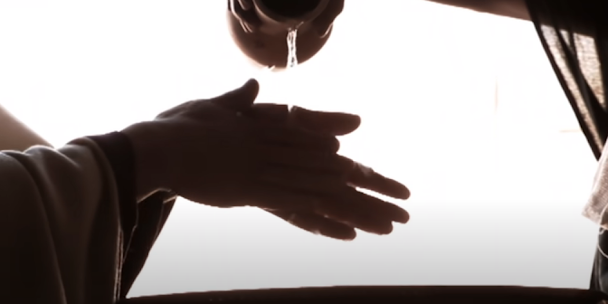 1. A diplomatic accord was made under Julius Caesar and Hasmoneans that the Temple was to be treated as an independent City-State totally under control of the high priests. The armed priests had recognised powers and rights to kill all intruders including non-Israelite Roman citizens, as Titus confirms in Josephus. 2. Jesus was arrested by Temple guards led by high priests who had major reinforcements at feasts like Passover. Not Romans. Gethsemane, where Temple oil was prepared on Olivet, was part of the extended Temple grounds and Davidic property. Roman soldiers were forbidden there. 3. Jesus (Christ = Anointed) was anointed with the holy oil of special preparation that was exclusively held by Aaronic priests. The Talmud says that the high priests, like Annas and Caiaphas, were not anointed but held office because of their holy garments. It is dubious that Annas had legitimate Aaronic blood. The faithful priests who held the special oil would not anoint them, Ex 30:32,33. Jesus had direct Aaronic bloodline, like John the Baptists, as both Elizabeth (Elisheva) and Mary (Greek Mariam) were of the daughters of Aaron (Luke 1). 4. Hence the struggle of the high priests (Roman nominees or Quislings) to retain power in the Temple. Jesus stopped their merchant trade in the Temple twice with the help of sympathetic priestly guards and bust the high priests' money making schemes. He denounced their hypocrisy in Matt 23 and the murder of Zacharias v35, the father of John the Baptist. John fled to the East, most likely Parthia until his surprise reappearance before the 'offspring of vipers' Mt 3:7. 5. Jesus affirmed the rule of the Eternal God but did not foment armed revolt against Rome. Pilate had access to the genealogical records that showed Jesus was the son of Joseph, called the son of David, Matt 1:20. Hence he had the legal right to kingship. Jesus did not call Pilate 'Lord' as the high priests did. Pilate knew he was rightfully a king and did not object. He was merely a prefect. He affirmed Roman recognition of Jesus as King of the Jews but he ordered the execution. 6. Pilate may have been part of the highly anti-semitic Sejanus faction that wanted to remove the 'Jewish problem'. Tiberius was in semi-retirement, leaving Sejanus to seize charge and control the Senate. 7. When Tiberius, who wanted peace and recognised the resurrected Jesus as a God, regained control, Pilate was sent for trial in 36 for abuses against the Jewish people. Gaius Caligula who had Tiberius murdered was ten times worse as an anti-semite than Pilate. He nearly brought total destruction of all Jews and world war with Rome's super-power rival Parthia.
at 3:25 PM