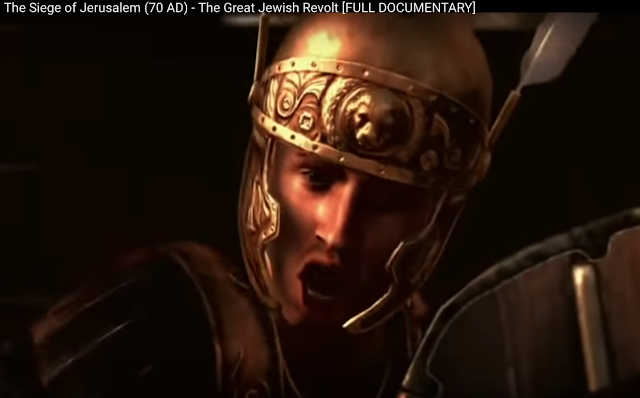 Invicta animation of the Siege of Jerusalem under Vespasian and Titus
https://www.youtube.com/watch?v=y741QbT1YEo

Riveting and highly educational! Great artistic work with careful descriptive detail! However, the narrative makes more sense if the identity of the Roman fort Antonia -- which was central to the battle -- is not identified as the itsy-bitsy building of the Holyland Hotel model but is identified as the so-called "Temple Mount" itself, the Haram. See Dr Ernest L Martin's book 'The Temples that Jerusalem forgot" at askelm.com or nazareneproject.com . It is built in the size and shape of a Roman fort -- which was usually square or oblong if extra large as this one was. It was the size of several cities (thus residence for multiple tens of thousands) says Josephus. It dominated the Temple from a higher position, he says. It was pagan and not considered part of the City of Jerusalem because of its paganism. Roman legionary eagles and pagan priests were allowed there but not in any other part of of Jerusalem. A correct translation of Josephus shows that the fort, a pagan military occupied site, was separated from the fort of the holy Temple by 200 metre bridges. It was in these stoa that the fierce fighting you described took place. The hand to hand struggles were so close that fighters could not recognise friend from foe. Then the bridge was burned. The bridge had provided high-level defense against anyone attacking the walls below. The Romans then had access to the outer wall of the Temple fort. The Jewish defenders themselves were at odds with each other, brigands versus others and the priests. The Temple itself was located on the curved peninsula of land the you showed at first as being highly strategic. It is south of the so-called "Temple Mount" or Haram, exactly 200 metres. It contained the only perpetual spring of water for Jerusalem at the Gihon Spring. The Temple was built on a platform partly suspended over the Kidron valley and was completely destroyed because the Roman soldiers tore everything apart. In the fire the gold and silver melted between its stones. This can be proved right or wrong by excavating into the deep soil of the Kidron valley to identify Temple stonework lying there. Thanks for the other details. For example that Titus offered a pig as sacrifice at the eastern Gate of the burnt out Temple. This confirms the account probably from Tacitus about Titus's plan to destroy Christianity and Judaism as they did not conform to the Roman pantheon and escaped Caesar's control as pontifex maximus: "Titus himself, thought that the Temple ought especially to be overthrown, in order that the religion of the Jews and Christians might more thoroughly be subverted; for these religions, although contrary to each other, had nevertheless proceeded from the same authors; that the Christians had sprung up from among the Jews; and that, if the root were extirpated, the offshoot would speedily perish. "