Jesus as a Security Risk: Intelligence and Repression in the Roman Empire

You post an unusual attempt to explain the inconsistencies in the story from the medieval RCC-Protestant tradition that came down to many of us in childhood. It seems this is still not correct. It conflicts with Jewish Law and historical accounts such as Josephus and Philo and early writings about the Temple. It wasn't some sort of public cathedral, open to all!
In the NT Jesus avoided being declared Son of David outside the Temple. Inside the Temple was different. Matt chap 1 shows that he was entitled to this as son of Joseph so it was not an unfounded claim. Pilate was a brutal governor yet it is Pilate who says that Jesus is innocent. No hint of treason or insurrection.
The high priests, who were not anointed, wanted Jesus the anointed dead. If Pilate wanted an excuse to kill him he could have cited 'causing an affray in the Temple' when he chased out the Temple the merchants 'thieves and robbers'. Both Josephus and Eusebius record that such affrays in the Temple caused thousands of deaths near the narrow passages that led to the Roman legion headquarters, the Antonia. It is more likely that Jesus cleared the 'thieves and robbers' in conjunction with the Roman authorities rather than without their knowledge. It caused no deaths among the tens of thousands of Passover visitors.
This incident occurred just before his night-time arrest by high priests but is not mentioned at the trial. Why? The Temple was under separate, priestly jurisdiction and not under Roman control. The area of his arrest on the Mount of Olives was connected to the Temple by a bridge and considered holy ground.
The Temple precinct was a small city-State and fort structure under armed Israelites and priests. This had been agreed in a treaty with Julius Caesar, according to Josephus. Roman army banners of their gods were banned. It was a no-go area. In Acts Paul was arrested in the external parts of the Temple merely on a false rumor. The so-called 'carpenter-preacher' was involved in very vigorous action INSIDE the Temple.
The missing piece of intelligence involves understanding what Christ's position was inside the Temple. It caused the high priests (plural) to want him dead. Pilate who was responsible before Caesar for justice and order merely acquiesced. Jesus was executed and the soldiers took his single-piece robe -- which was a priestly one described in Ex 28:4, 31 etc.
According to Justin Martyr (early second century), Tertullian around 200 and Eusebius and others, Pilate confirmed Jesus rose from the dead. He may have witnessed the Ascension from the Antonia. On receiving his and other reports, Tiberius declared Jesus was God and forbade Romans to persecute the Nazarenes. His successor Caligula defied God and tried to foment a war of genocide by ordering a huge golden idol of himself as Jupiter be placed inside the Temple-fortress at Jerusalem.
Far more than a simple accusation of insurrection based on military spies was involved.
at 2:50 PM No comments:

The following archaeological Proof of the Resurrection is included in the latest version of the book. Many documented physical resurrections took place -- for centuries! The Romans were faced with empty tombs  -- where the body was missing but the other articles were left. Hence, not grave robbery! There are also numerous historical confirmations not included here. Roman emperors, like Tiberius and later second century ones, acknowledged the resurrection of Christ was a fact. These events were a major incentive and proof for those who gave their lives in the pagan persecutions. Christians preferred to die for the Creator God who could resurrect rather than offer a pinch of incense to the pagan gods or to a 'divine' Caesar like Caligula. Roman pagan gods .lost credibility.
The Resurrection of Christ and physical resurrections of Christians -- and the Roman Emperors acknowledgement of them -- led to the destruction of the pagan system. This is why Constantine declared the Roman Empire 'Christian'. For the majority of the citizens, the pagan gods were dead! 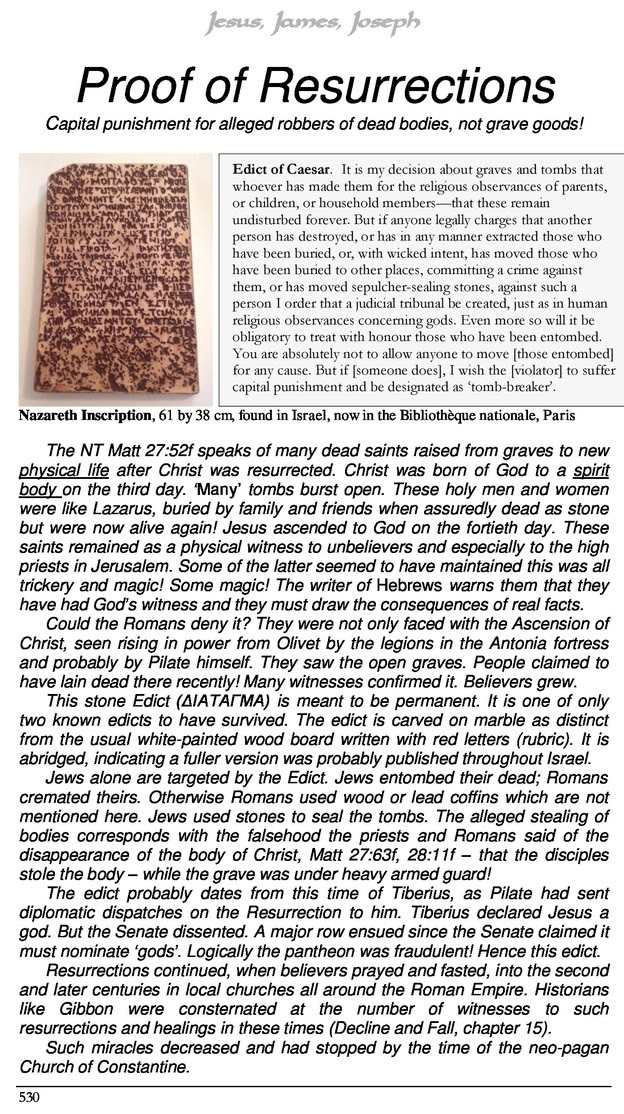