ANSWERS from Historical Documents about Judaism’s and Christianity’s burning Questions:

·        Why does the New Testament have TWO different ‘genealogies’ of Jesus, BOTH through Joseph? Who was Joseph?

·        The Chief Priest’s duty was rebuild the holy Temple! Not Herod, a fervent pagan! Who?

·        Why don’t churches acknowledge James, the brother of Jesus, who prayed inside the Temple’s Holy Place? Who owns the site?

·        Why are Rome’s churches silent about Parthia, the superpower that invaded Israel and defeated the Roman Empire’s greatest generals and decimated its legions?

·        Not three ‘Magi’ but thousands of ‘Magi’ and Parthians arrived after the birth of Jesus in a cavalcade and terrified both Herod and all Jerusalem.
·        Where did the false myth originate that Jesus was a carpenter?

·        Which Scriptures say he was a great Chief Priest with authority over the Temple? He taught high priests there.

·        The first Congregation (ekklesia) of Christ met INSIDE the Temple! All the tribes of Israel were represented there.

·        Pilate was a brutal Roman governor. Yet he confirmed legally that Jesus was both ‘King of the Jews’ and innocent of any charges of treason against the Empire! Why?

·        Emperor Tiberius confirmed that Jesus rose from the dead and was God!

·        After Christ’s Resurrection, Rome had to abandon its traditional gods like Jupiter, Mars, and Venus. These ‘gods’ became the laughing stock of the world!

·        The successor, Emperor Caius Caligula planned to be deified in Egypt as ‘Supreme God’ and to move his capital to the Temple!

·        Instead of worshipping Christ, the ‘Jewish’ ‘Sun of Righteousness’ Malachi 4:2, why did Romans turn to literal Sun worship?

MAIN FEATURES OF JERUSALEM at the time of Joseph, Jesus and James. The Temple was built over the Gihon spring. It is south of the massive Roman Fort, Antonia. ALL TEMPLE LAND and S Olivet STILL belong to King David’s FAMILY!

Josephus, priest, soldier, historian and eyewitness, described the Temple situated on a square or cube-like tower above the Kidron Valley, each side one Roman stade. Two stoa roads were like arms a stade long. The stoa double causeway on the Temple’s northwest led to the oblong 10,000-strong fortress of Antonia, the size of ‘several cities’ for legions. Accounts say the Temple had an inexhaustible, gushing spring, Gihon. Antonia (the Haram) had no spring. 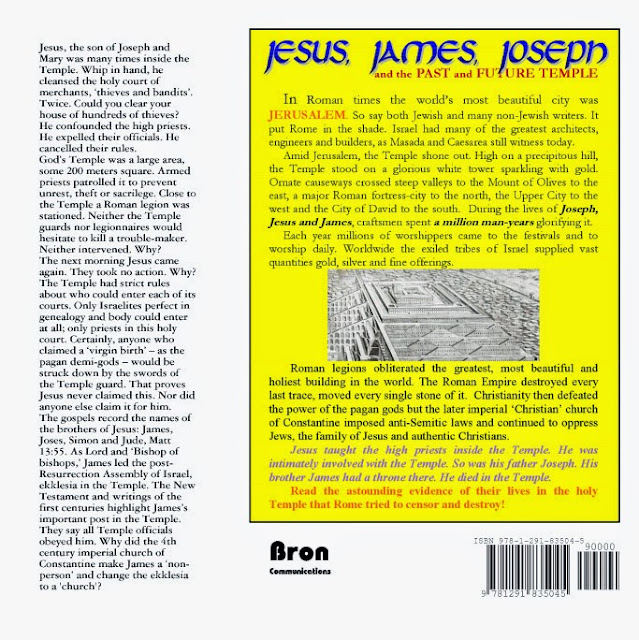