Why does Genesis say Abraham's army went to Dan before Dan was even born?

'When Abrahman heard that his brother was taken captive {by the army of a coalition of nations including Chedorlaomer, king of Elam, Tidal king of nations, Amraphel king of Shinar, and Arioch king of Ellasar) he armed his trained servants, born in his own house, three hundred and eighteen, and pursued them unto Dan.' Genesis 14:14.

The city of Dan was called Laish in the time of Abraham, long before the man Dan and his tribe existed. Dan was the son of Jacob, the son of Isaac, the son of Abraham.
The tribe of Dan conquered the city of Laish and called it Dan. The same question goes for the city of Ramasses (Gen 47:11) and in Ex 1:11. It is a later name for Avaris in the land of Goshen.  Pi-Ramesses was a later city built by Ramasses II on the site. What is the explanation?
It is the same as saying that the Romans in Britain had a legion in York. York did not exist then. It was known as Eboracum.
All the question is asking is who changed the names and updated the geography to modern recognisable names? The updates do not imply, and far less prove, that Moses did not write the Pentateuch or that the Romans did not invade Britain and have a fortress there because "York" did not exist at the time.
Who edited Moses and why? And under whose authority? Can anyone alter the texts? The answer to the last question is NO. There is a line of authority where responsibility for preserving the texts is passed on from generation to generation. New books are added to the canon under the supervision and imprimatur of the canon authority usually under the headship of a designated person.
It is often correctly pointed out that the last lines of Deut were probably added by Joshua who wrote the next book and was given authority as leader by Moses. How do we know?
Firstly the Pentateuch says so. The Hebrew Bible mentions later editors and canonisers.
There is also a document written by Hippolytus the Syriac Targumist who lists all the Canon Supervisors from Moses to Christ. The law, it says, was delivered by Moses son of Amram to Joshua son of Nun.
Fifty six Canon Supervisors are listed up to Joseph the Teacher. It includes Simeon the high priest 'who carried the Messiah in his arms' (Luke 2:25, known elsewhere as Simon Boethus). Simeon delivered it to Jehuda and Jehuda delivered it to Zechariah, the father of John the Baptist. Zechariah delivered it to 'Joseph the Teacher of his tribe'.
Technically the term Teacher refers to the Cohen haRosh (chief priest) who supervised the high priest (cohen haGadol) in his work and catechised the high priests. The NT uses the terms Tekton which is badly translated in Vulgate and Protestant version such as KJV as 'carpenter'! That is through the millennium-long influence of the RCC. (Geobbels and Soviet disinformation department of the KGB would have loved that amount of time to manage information!)
Tekton means technical expert. The NT also uses the term Master of the Holy House (Temple) oikodespotis. Jesus is called a Temple Teacher and so this Joseph the Teacher is most likely his father, Joseph. (Joseph of Heli or Elem in the Talmud, the Tosefta and Josephus). 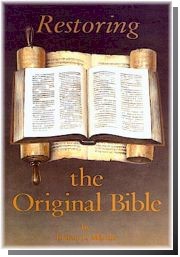 As well as adding books to bring it up to the requisite 22 books corresponding to the letters of the Hebrew alphabet, the Canon Supervisors could with their editorial council bring geographical terms up to date. For more on this see Ernest L Martin's Restoring the Original Bible.
For the answer to the question:
Who finalized the Hebrew Scriptures and then the Greek ones see my article at

and Rome's fraud about the Bible canon at
http://thenazareneproject.blogspot.com/2017/07/bible-canon-romes-fake-history-about.html

How did the Crucifixion affect Roman-Parthian relations?

The anticipation of the Messiah changed both the Roman and Parthian Empires, the crucifixion more so. Parthia was a confederation of tribes that Roman legions tried to conquer. Parthia was the Super-Power of the East, a deadly rival of Rome's military autocracy.
Parthia trounced mass invasions of Roman legions several times. In 55 BCE Parthian King Orodes slaughtered 40,000 legionnaires under Consul Crassus. In 40 Parthia invaded the Holy Land and deposed the Roman-designated high priest. Parthia soundly defeated Mark Antony in 37 BCE. In 34 BCE Julius Caesar was assassinated mysteriously before his planned invasion of Parthia.
The two empires made peace in 22 BCE under Augustus and Phraates IV (=Arsaces XXII). Why?
Parthia was run by the Arsacid dynasty (250 BCE to 225 CE). Its rulers were composed of Israelite and Jewish exiles (Sons and rulers rosh of ISaac). Secular histories say they were formerly slaves and called themselves Exiles (Parthi in Scythian or Hebrew Galut = Gauls, Galatians, Kelts). They wanted to rebuild the Temple in preparation of the Messiah, dated according to Daniel’s prophecies. (Daniel was member of the Persian Magi, the priestly class of scientists and prophets). 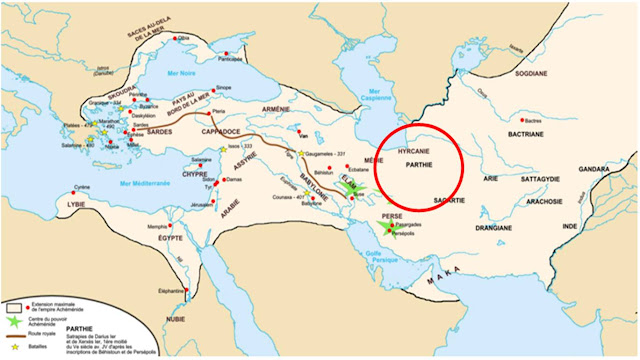 The reconstructed Temple became the most important and biggest construction site of the time (one million man-years work). Vast riches were received from across both empires and around the world (Josephus).
Jesus was identified by genealogy and miracles as the Son of David through Joseph. Mariam (Mary) was of pure Aaronic descent. Jesus was not an itinerant preacher, Protestant style! Pilate acknowledged him as King of the Jews. Pilate recognised Jesus as having a higher rank that he had, as merely a governor of Rome but not a royal. The high priests called Pilate Lord, (Kurios) but Jesus did not.
The resurrection was a shock to both the high-priestly ruling class and the Romans. Ample evidence existed it took place with many Roman witnesses, including Pilate. Based on diplomatic reports of Pilate, Emperor Tiberius acknowledged that Jesus Christ was a god. The Senate, however, refused to ratify this. Tiberius decreed however that anyone who persecuted the Nazarenes (his followers) would be put to death (Tertullian etc).
When Tiberius died in 37 CE (at the hands of Gaius Caligula), Caligula became emperor. He saw that the resurrection undermined the whole Roman/Greek pantheon. Roman gods had to be authorised by the Senate. But here was a Jewish king resurrected and recognised as a god by Tiberius! Caligula, drawn by Egyptian paganism, wanted to be deified as God of this world. In that way he would, he thought, outclass Christ. He planned first to raise a mammoth idol of himself in the Temple of Jerusalem. Why? Because Christ had prophesied that the Abomination of Desolation would stand in the Temple before the end of the Age. This was also prophesied by Daniel (Matt 24:15). Caligula wanted to prove Christ wrong and that he was all-powerful and more god than Jesus. He failed.
The later emperors like Claudius were at first more cautious with the Christian threat, but then introduced a vicious campaign of anti-Semitism, trying to provoke a Jewish revolt. Wars broke out from Britain to Parthia.
James the brother of Jesus was Sagan and Priest of Warfare in the Temple and advised passive resistance. He was killed in the Temple around 62 CE and the high-priestly class then refused to make offerings to the Roman emperor in the Temple. This led to the war with Rome.
it also created a dilemma for Parthia (which was not a military dictatorship like Rome). Suppressing a revolt in Judea did not violate the peace treaty. Titus went further. He destroyed the Temple. He said that that way he would put an end to both Judaism and Christianity (Sacred History of Sulpicius Severus) quoted on NazareneProject site. Titus raised a pagan pillar to his father on or near where the Temple had been.
The Parthian empire lasted nearly two centuries further but on a war-like footing. The Parthian Peace based on the Temple and its Messiah had lasted longer than almost any other in history. The Roman pantheon was destroyed by the resurrection. Rome reverted to Sun worship and foreign cults. The gods like Jupiter, Mars, Minerva became a laughing stock. Rome tried syncretism — trying to combine their paganism with the facts of the resurrection and resurgent Christianity.