To answer the question, let's start with the solid world of physics. At the start of the Universe there was INFORMATION, lots of it. Some people think of this beginning as a 'Big Bang'.
Wrong.
That implies an explosion where information and order is destroyed in a BANG.
All physicists now recognize that a different process took place. A vast amount of information was brought into effect  (laws of mathematics, laws of physics, constants of physics, and constants of mathematics like Pi, and laws of morality of good and not-so-good etc).
That BEGINNING was the most ordered part of the history of our universe. The second law of thermodynamics is about decay of order. It shows that order, form and shape fall apart. Things decay. Iron rusts. Houses collapse to ruins. Hot and cold mix to form a uniform lukewarm temperature. Unless there is a sustainer.... For us photosynthesis and the sun's energy stop us from becoming cold and dead.
We on the Earth, that was formed only 4 1/2 billion years ago, are not the most ordered part of the universe but part of what we have after the passage in time of the universe formed about 14 billions of our years ago. Materially we are decay products -- if no further input has been given to the Universe in those years as we count them and imagine have past.
What does Physics tell us? Information cannot be destroyed. Laws of Physics remain the same. However, -- wait for it -- there are massively disturbing consequences for this. Order, shape and form can be destroyed Big Time in a Black Hole.

With a Black Hole we move from changes of shape as might happen in a car crash or composition as might happen in a chemical reaction, or even the effects of an atomic bomb to something beyond violent destruction. A Black Hole makes mincemeat of atoms and even atomic particles and its most intimate substructures, crushing them to seeming oblivion.
Can information be 'done in' too? 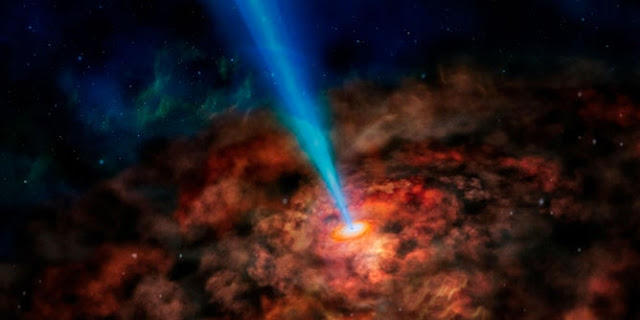 When matter is pulverized in a Black Hole, where does the information go? After some controversy among physicists they came to a common understanding. Information can't be lost. (Crushing does not go on forever. Matter and radiation is eventually spewed out in devastatingly powerful beams.)
So what happens to the information?
The information relating to shape and form of a theoretical space ship falling into it is held at the 'event horizon' . That is the border where we see object around or crashing into a Black Hole and them disappearing to be crushed to pieces and where light cannot leave the hole because the gravity is so strong.
This event horizon or border can be considered to be like a two dimensional sheet wrapped around the Black Hole. It has no thickness. It is more than a two-dimensional spherical map. Think of it as a hologram. A plain sheet hologram can project a three dimensional reality as we move and observe it. The mathematical data is the same. But curiously those looking from the outside at the Black Hole and those on the space ship plunging into it see the event horizon in slightly different places!
In fact everything can be considered in the same way as a hologram.
Short video:   https://www.scientificamerican.com/video/is-our-universe-a-hologram-video/
Longer amusing video at World Science Festival with top physicists including ex-plumber Prof Leonard Susskind (who has a separate presentation on this on the Net.).  https://www.youtube.com/watch?v=HnETCBOlzJs
He says the permanence of information is more sure than, in effect, the physicality of the universe (such as what happens inside a black hole). All the information inside the Black Hole can be converted to information in (bit-like) information units on its surface area.
This led to the broader principle that all the information could be recorded on its surface with bits of Planck cube size (1.6 x 10 to minus 35 meter). All information about you materially could be written on your surface. (Caution: this 'information' that scientists talk of is the material universe, its atoms, substructure plus such effects as light photons. It does not refer to the conscience spirit of man or the existence of a non-material spirit world. That can't be measured by the best of scientists.)

All the material information in the universe can be written on its surface. What is the surface of the universe? Where does it end? It is not only expanding but accelerating in the expansion.
Information is eternal as far as physicists can tell. Information is the true track to understand about God. Solomon wrote:


Great is God above all 'gods'. The heaven and heaven of the heavens cannot contain him.

We cannot hide ourselves anywhere in the Universe from God. It is like trying to hide on a flat plain where we would stick out. Jeremiah 23:24 records:

So 3-D information in our universe can be seen as a two dimensional hologram.

What about TIME? Four dimensions of Space-Time of Relativity can be considered to be like a graph paper. In effect, we can move our finger to a point in the graph but the line of the graph exists of itself.
A satellite around the earth has a different clock than a clock on surface. Why? Because it is moving at speed. We all have a different clock. The universe too. It started as a huge expansion with small space and compressed time.
Gerald Schroeder showed that the expansion of the universe could be considered as Six Days of a Creation doubling in size and expanding the notion of time from an earth point of view. The process of expansion of the universe doubles the four dimensions of space-time. Time expands! If someone sent a pulse of light out every second at the start of the universe, it would take longer to reach us because both the distance and the time frame is expanding.
How much?  A million million seconds!
The God-perspective of the Creator sees it as six days. The factor of expansion is a million million, and six times a million million DAYS equals around 15 billion years. This must be the only way to look at it if time is relative. Recent discoveries found the cosmic microwave radiation background temperature to be around 2.73 degrees Kelvin (from the 3.03 it would be otherwise) and astoundingly that the universe is accelerating in its expansion. Schroeder is able to correct the age of the universe in our terms to be about 14 billion years.
Viewed from God's angle as Creator, the days of the universe would measure in our years:
Day 1       7.1 billion years
Day 2       3.6 billion years
Day 3       1.8 billion years
Day 4       0.89 billion years
Day 5       450million years
Day 6       230 million years
The Greeks thought of the standards of length and time as absolute. The Hebrews didn't. Days were measured from sunset to sunset, not by a mechanical clock. The movement of the earth around the sun was another clock for the Hebrews. But that is not mechanical and varies because the earth moves in an ellipse not a circle and it 'wobbles' and is influenced by the moon and other planets.
It is quite different from the system scientists use today which is Caesium isotope decay.
We live in a culture dominated by the false Hellenistic world view. That makes it harder for us to grasp some of these concepts. Schroeder shows that the Jews had a long tradition about a view of the Six Days of Genesis that is entirely in harmony with modern physics, and our understanding of the age of the universe as we see it. It also provides material for further scientific investigation.
How should we consider time? What does the four-dimensional map of space time look like? Philosopher Huw Price (no relation) talks to Robert Kuhn about this substratum of time in the following video.    https://www.space.com/29859-the-illusion-of-time.html
Physicists have also identified an area of information that humans cannot access. When I was at university it was called the Absolute Elsewhere. All the above assumes physics is dealing with materialism. (Materialism is a false theory that has led to both Communism and Fascism.) The idea of LIFE -- that is only found on Earth -- having a spiritual existence lies far beyond this present discussion.
So we are left with the conclusion from the most down-to-earth people, physicists, that

Real Reality lies outside our experience.  We may be creations in the mind of God. Physics shows us that we are in some ways imaginary in a greater mind.

This real reality begins with an Information-giver. That is the Being I worship. The logical linkage shows he is the God of the Bible.