This is an extract of a speech given by Dr Joseph Priestley in Philadelphia before John Adams and other American Founding Fathers, in 1796. 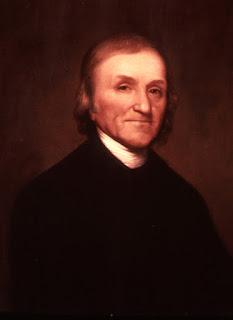 "Far am I from supposing that the evidence for the being of a God is not demonstrative, since marks of design, with which the world abounds, necessarily imply a designing or intelligent cause. But notwithstanding this, we can never fully satisfy ourselves with respect to the objections of the atheist, that if the universe require a cause, this cause must require another; and if the author of nature, or the being we call God, exist without a cause, so may the universe itself.
"All that we can say in answer to this is that, whatever difficulty we may labour under with respect to this subject, which will always be above our comprehension, the actual visible world, and marks of design in it, cannot be denied, and therefore, whether we be able to proceed further or not, we must acknowledge a designing cause. Otherwise we might say that a house had no architect, or a child no father. If the eye of man had no designing cause, neither did a telescope, which is the instrument of a similar nature, evidently adapted to answer a similar purpose. And at this every mind would revolt."
"The author of nature is one,
that he is simply, invariably, and infinitely good, and
that all the evils we see and experience, are calculated to promote good,
are great and sublime truths, which derive from revelation only, though, on strict examination, they appear not to be inconsistent with the appearances of nature."
"Discourses related the Evidences of Revealed Religion", 1796 with a Dedication to John Adams, published during his exile in America. Joseph Priestley was known as Chemist, the discoverer of Oxygen, a philosopher, theologian and historian of the Corruptions of Christianity.
at 10:03 AM