What the Hebrew version of Revelation tells us

A Hebrew version of a chapter or two of Revelation in the British Library was re-examined by Nehemia Gordon, the Hebraist scholar. His two programs about it are well worth a listen. The Hebrew text plus English translation is available also at
https://www.nehemiaswall.com/hebrew-manuscript-revelation-1
Was it a late translation from the Greek or was the Greek translated from the Hebrew?
One aspect that may indicate that the Hebrew original came before the Greek (though the British Library copy was written out much later) is in the word for 'key' in Greek. The Hebrew uses the more colloquial and unspecific term for key  'nail' -- a key is a bent nail. It is more likely that the colloquial is translated to the more formal and proper 'key' than that 'key' was translated into the colloquial and ambiguous word 'nail'. 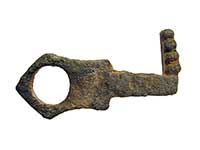 This is a bit like translating the word for gun into the slang 'irons'  which means side gun at least in the cowboy movies. "Leave your irons outside the saloon, boys!" But a translator from an unambiguous Greek text, in a legal document, would not use a loose term. Here we are dealing with a theological/ legal document that should not be misunderstood.
John would be more at home in Hebrew than in Greek. The gospel of John is, as indicated in the 'we' passages at the end, edited in smooth Greek by several people as co-witnesses.
The second interesting point relates to the concept of ekklesia = Assembly (as opposed to the RC/Protestant concept of top-down "church").  The gospels and the NT translates the Hebrew term qahal= Assembly or Congregation as Greek ekklesia. In the Hebrew Revelation the seven "churches/ekklesias" are translated by a derivative of qahal,  maqhel. This can be translated as choir. Curiously, this concept choir = bangor in the ancient British tongue, is what was used to describe the first established Christian communities/ colleges in the pre-Roman Catholic Britain (pre-600).