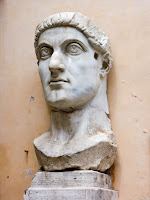 The Bible claims to be God's book. The canon must have God's clear authority. It does not come from an emperor or any group  of humans who wish to set themselves up as canonizers.
Which group and which leader is the only valid one?

The principle of defining the Bible canon comes from the Golden Rule. The first part reads: You shall love the Eternal your God with all your heart and mind and all your force. The Bible needs God's authority to define it. The second part follows: Love your neighbor as yourself.

But what about the Christian attitude to their neighbors, the Jews and also Hebrew-speaking Jewish Christians? Doesn't the phrase 'Love your neighbor as yourself' originate in the Hebrew books of Moses?

Modern sectarians and some 'scholars' say the Bible, especially the 'New Testament', was defined by the Church at the Council of Nicea in 325. This is fake history. This Church Council dealt mainly with doctrinal disputes such as defining the personage of Jesus Christ and a Creed. The New Testament was already defined for this. The dispute on the canon actually arose in the latter part of the century when the Roman bishop wanted to change it. (The bishop of Rome was not present at Nicea.)

Why then did more than a thousand years of hating the Jews follow? Doesn't the Golden Rule in the NT canon forbid it?

At Nicea the Roman Empire was then under the authority of the first 'Christian' emperor, Constantine. He was still unbaptized but had the enlightened attitude that the type of Christianity that he had witnessed in his native Britain could be tolerated throughout the Empire. Even before Romans and Christianity arrived there, Britain had never persecuted anyone for religious beliefs. Constantine learned about Christianity from his mother a British princess, Helena, daughter of King Coel Coedhebawg .

But in the East there was religious dissension and fierce anti-Semitism. He called a Council of the (non-Jewish) Christians at Nicea, relatively close to his capital of Constantinople. It involved a number of pagan philosophers plus the sectarians who had banned Jews and Jewish Christians. Rome, the imperial center of paganism, had long been abandoned as an imperial capital.

Was a new start possible? Constantine  took a tough line. He said he considered himself greater than all the apostles. Could he then define doctrine, the canon and stop the quarrels by making himself a dictator? Would you like Hitler or Stalin to be the one to define the Hebrew or Greek canon? Who would agree to a Roman dictator? only their followers--  the Roman Catholic and Protestant churches. How does a dictator define truth? How does he  'manage' freedom of religion?

The Nicean Council set the new imperial religion on the wrong track. It condemned Sabbath-keeping and established what Constantine called 'the venerable day of the Sun'. Sun worship had been part of Roman worship since the collapse of the classical pantheon in the first centuries. It also banned the Passover and substituted the pagan Easter.

From first to third centuries, Roman imperial religious Caesars wanted to extirpate Christianity by deaths, slavery or by disinformation. If the Roman authorities could not kill Christianity, the next best thing was to assimilate it into the pagan system of the College of Pontiffs. Constantine was now Pontifex Maximus, the Supreme Pontiff, ruler of all religious cults. (The popes use this title today.)

In Rome, then a provincial backwater to Milan, paganism still held sway among the old families. Rome depended for its continuation on maintaining a sufficient number of Vestal Virgins. Its Senate met in the temple of Jupiter Capitolanus. These beliefs in the pagan trinity and the virgin births of the demi-gods had strongly influenced the doctrines and theology of the Latin-speaking church.

Could Rome create its own NT Latin canon? Could it pick and choose the books in a Latin Bible? Rome then despised Greek wanted to exterminate all Hebrew speakers, Jews and Christian. (Paul wrote to the original believers in Rome in Greek, not Latin!) They were among the first to abandon the Passover for Easter in the second century. Its citizens generally knew no Greek. The Latin translations varied in accuracy. The Hebrew Scriptures were banned. But true Christians including those in Gaul and Britain knew the essential power of these texts. Many had died defending it. The memorized the books and recited them.

To influence Europe, Rome needed a Bible in Latin. The canon question only arose because Rome wished to alter the existing Hebrew and Greek texts. Why? Not for truth but for power and influence.

The canon was already clear at Nicea in 325. Evidence? In 331 Constantine commissioned fifty Bibles for the church in Constantinople. The dispute about the canon arose decades after. By then further confusion and rivalry had occurred. For several centuries the empire had been victims of fraudulent gospels and writings. Each group opposed the other in saying which book should be added or which generally accepted book should be deleted because it spoke against their own pet heresies. The result was logjam. It was impossible for a body of pagans and error-ridden sectarians to add to the existing Bible or diminish it. They resigned themselves to recognizing the already established canon of the people they had killed, expelled or enslaved. The accepted books of the canon had been treasured and expounded for centuries in the faithful congregations around the empire and beyond.

What lay behind the dispute on the canon around the 390s? A jealous fight for leadership among the pagan and nominal Christians in Rome, Alexandria, Antioch and Constantinople. The majority of Christianity confirmed there was only one canon. Only one was possible. In 390s the Roman church was forced to set Jerome about the task to translate the Hebrew Scriptures into Latin and revise the existing Latin NT versions to suit their purposes. But Latin holds no authority as a Biblical language. And soon Latin became an unknown language to the people and also to the priests who mumbled phrases they did not understand.

The Bible canon was fixed in the first century. That included the Hebrew Scriptures and the Greek.(It excluded some genuine apostolic writings!) The writings  of Christians in that time show they quoted from this canon. How was this canon made? By the system of authority of the chief Scribe in the Temple (like Ezra) and the congregation of the leaders of the12 tribes, qahal, ekklesia (in Greek) as had been done since the Pentateuch. Jesus is called the president of the ekklesia in the NT. The term is epistates, 7 times in Luke. Check a lexicon or wikipedia https://en.wikipedia.org/wiki/Epistates His brother James held the same office, followed by John (who defined the NT). This is explained at http://thenazareneproject.blogspot.be/2017/04/who-canonized-bible-both-covenants.html and at askelm.com, the site where the book of Dr Ernest L Martin on Canonization can be found. The modern-day writers who maintain Nicea as the time and place of canonization are victims of the same Roman disinformation, active for 1700 years!

David Heilbron Price is author of Jesus, James, Joseph and the past and future Temple available at bookshops and online at academia.edu/25051668