Pilate, Sejanus and the Resurrection of Christ

1. Jesus Christ (=the anointed king) was crucified on a tree in 30 CE.
It was not his 'last days' as he was resurrected to the general knowledge of all at Jerusalem. Forty days later he ascended in full public view from the Mount of Olives -- this would have included all the priests and people in the Temple and all the soldiers in the Roman Fort, the Praesidium (up to 10,000 legionnaires and ancilliaries) plus all the pilgrim crowds.
The second-century Christian lawyer,Tertullian, recorded that Pilate wrote dispatches to the emperor Tiberius about this to give the official version as everyone around the empire already knew about it.
Pilate was extremely anti-Semitic and had probably been placed there by the violently anti-Semitic Sejanus to stir up trouble. Yet he affirmed the eye witness accounts.
Sejanus had been plotting for years to overthrow Tiberius who had retired from official duties for sex games in Capri.Sejanus, his Praetrorian Guard chief, was de facto emperor. He became so powerful and manipulative that many Romans worshipped in a cult. He was a smooth operator with the Senators who were vital should he succeed in his plan.No one could put their name forward as a Consul without his favour. Sejanus became a Consul with Tiberius -even though he was not ranked as a Senator. With this Sejanus hoped that he would just eliminate Tiberius and everyone would presume he should be emperor although he was not of any imperial family. He was overcome with egotism -- and hate of Jews. 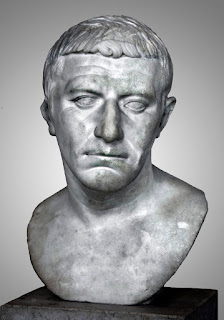 Sejanus, possible statue
2. The Resurrection threw this long-gestating plan into a spin. Tiberius, say Tertullian and other early writers, acknowledged that Jesus Christ was god. Sejanus and the Senate tried to stop this as it would mean ruin for their centralized control after a coup d'État.
The Senate pulled out an old law that said that only the gods approved of by the Senate were gods! This was clearly nonsense as a royal and priestly Jew had been resurrected to everyone's knowledge.
Tertullian mocks this pagan foolishness, saying the poor gods would have to pray to the Senators so they could be recongized as gods!! Furthermore many saints as Matthew says rose from their graves at this time. The archaeological and written proof of this are in the book.
3. Sejanus's reaction later in 30 CE and early 31 was to try to exterminate all Jews. That's what Philo and others say. Exterminating all believers would mean that Rome could turn back to ribald, old-time paganism. Instead his treasonous plot was revealed to Tiberius (who was not so anti-Semitic and more interested in maintaing imperial peace with Parthia). The old emperor did some some careful investigation and deft political footwork. Sejanus was "dethroned" and skewered.
Tiberius then proclaimed that anyone persecuting Christians (or Nazarenes as they were then called) would be killed. The ekklesia had seven years of peace.
4. Sejanus, who had been head of the Pretorian guard, was replaced by Macro. Gaius Caligula colluded with Macro and killed Tiberius. Caligula's way of dealing with the Nazarenes and the Jews/ Israelites/ Parthians/ Kelts was to provoke the Jews into a war of extermination, while trying to hold off the Parthian Super-Power enemy so they would not come to defend Jerusalem and the Jews.
Caligula already had his statue set up in all synagogues around the Empire. Jews suffered at this idolatry. Caligula wanted to go to Egypt where he would be made a god, 'as Egyptians knew better than Romans how to make a man divine'.
Philo Judaeus of Alexandria in Egypt made the cutting but careful remark: "to change God into a man is more easily done than to change a man into God.'
The Roman Supreme Commander in the East stationed in Syria, Petronius, prepared for war with Parthia. It seemed inevitable. Why? Caligula had ordered him first to set up a giant gold statue of Caligula as Jupiter and place it in the Jerusalem Temple. After that Caligula said he would come and set up his imperial Roman headquarters in the Temple.
We can easily guess why. Because Christ had said that 'an abomination of desolation' would sit and rule in the Temple as God. Caligula wanted to prove Christ wrong.
This act would have meant World War as Jews and Parthians and the Israelite Diaspora would attack and defend their most beautiful and precious City and the holy Temple to which they had all contributed in rebuilding for half a century since the time of the Parthian peace treaty.
Both Philo and Josephus say that the Israelite Diaspora were in number the greatest people on earth, though scattered in several countries and islands.
5. World War did not come. Caligula failed to conquer Britain, where Christianity took hold and was evangelizing the Continent. The "Triad of Lazarus" showed how false his divinity claim was. Caligula was assassinated in a back alley in Rome as he prepared to leave for Egypt. Dogs drank his blood. These dramatic events only added to the number of believers around the world.
at 1:12 PM