Humankind needs to learn humility when gazing at the stars and planets. It is clear that mankind was not their maker. What man can make is insignificant, even in relation to our own home.

But I disagree with those that say the Stars and Planets do not have significance. They speak for the Great Creator and Information Giver who first designed and then made them all.

Let us go to one of the signs of the Hebrew zodiac: the Pleiades, Hebrew Kimah.

Can you fasten the harness of Pleiades? (New Jerusalem)

Can you bind fast the cluster Pleiades? (Bullinger)

Can you bind the sweet influences of Pleiades? (KJV)

The Pleiades are known as the Seven Sisters. What does it mean fastening or binding them? Only recently the most powerful telescopes make it clear. Imperceptibly to the naked eye they are moving closer together. This data was collected from massive earth telescopes in Australia and elsewhere and combined with recent data from the Gaia space satellite launched in 2013.

Careful measurements with the Gaia space telescope and others show the stars of the Pleiades are slowly moving in the sky. One star, Pleione, is now so close to the star Atlas they look like a single star to the naked eye.

But if we take what we know about the movement of the stars and rewind 100,000 years, Pleione was further from Atlas and would have been easily visible to the naked eye.

The writer of the book of Job had magnificent eyes or maybe, as the book says, someone listened to the Great Information Giver who made the stars.

What about the other part of the verse about Orion, Hebrew Kesil:

Can you loosen great Orion's bands?

The three stars of Orion's belt are a line-of-sight constellation. Two stars may now be shown to look like they are approaching each other while the third is drifting out of the arrangement and may eventually break up the three-star line-up completely.

Can you guide Arcturus and his sons?

Arcturus and his sons are all on their own course at rip-neck speed.

Can the movement of Planets, Stars and Constellations predict the future? Can they show events of the past?

Humans have no ability to move stars. Their course can be worked out by the eternal laws of mathematics and physics. We have a sure means to see how their position predicted events before, when and after such notable events happened. Humans have no excuse for not paying attention.

Eternal God, creator of the Universe

Humans are subject to error and tempted by deliberate deceit. Humans cannot muck with movement of the planets, comets and stars. That was the reason that Kepler, Newton, Whiston and other believing scientists tried to determine what, when and where was the Star of Bethlehem.The heavens have an extraordinary, clear and unambiguous message. But what is it? We should not seek it in pagan, Chaldean astrology.

What does the Bible say? What is the configuration of the heavens in the autumn of 3/2 BCE?Astronomers in the past could work this out. Many people in the early centuries were far more skilled and literate in astronomy and its real significance than people today -- in spite of so-called popular astrologers.They looked at the sky at night and knew the stars and the movements.But how do you see what was happening way back in the past?You can also this ancient stellar display in the heavens at a planetarium when they set the mechanism back 2000 years.Now with the help of the computer and software it is possible for anyone at home to see exactly the movement of the planets back into the distant past.What did the night sky look like in 3/2 BCE?It is an extraordinary fact, as Dr Ernest L Martin points out, thatClick the link here to have a description of the Ancient Astronomy of this time by Dr Michael Heiser. 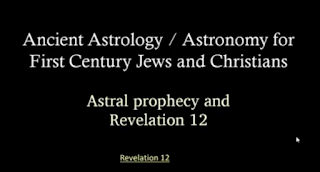 One reason people observed the stars was that it was religiously significant because observation of the New Moon was essential to define months and proclaim the New Year. What is even more extraordinary is that 11 September was the beginning of the Feast of Trumpets in the Hebrew calendar. Revelation 12:'And there appeared a great wonder in the heaven; a woman clothed with the sun and the moon under her feet, and upon her head a crown of twelve stars.'This year is also confirmed by Luke's statement that Jesus was 'about thirty years old' when he began his work as chief priest and teacher in the Temple. This has to be understood in relation to the Hebrew inclusive arithmetic system and the Jewish secular new year (common through the eastern Roman Empire). It is also defined by the known dates for the reconstruction of the Temple by Simon Boethus under Herod the Great.The date of the birth of Jesus is 1st Tishrei in year 3 BCE in the autumn.This fits all the criteria ofThe heavens don't lie.
at 10:59 AM