Tom Paine debunks the Virgin Birth. What else did he miss? 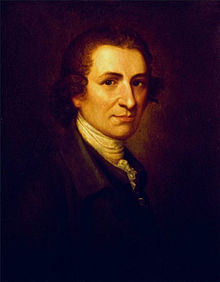 Is the belief in Mary's Virgin birth is necessary for salvation? The answer to the question is "It depends on what you mean by Virgin Birth".  The conundrum arises because people today seldom read the Bible logically. They confuse what the NT actually says with common custom of "Christmas", nativity and Virgin Birth (that is virginal conception). There are animals and stables, mangers and the story of 'no room for them in the Inn'.
This mythology derives from the non-Jewish and often paganized church of the third and fourth centuries. The dogma of the BVM (Blessed Virgin Mary) is maintained up to the present by Roman Catholics, Protestants and others.
The 18th century best-selling writer and revolutionary,Thomas Paine, opposed this false interpretation. Fine! but he was fighting many shadows and falsehoods. The paganized accretions of the church also added quite a number of falsities that are still present today.
Mary's name was not Mary -- it is Mariam in the Greek NT. This is equivalent to the name of the sister of Moses, a Levite. She was not a young girl but was an old woman like her cousin, Elizabeth. And Elizabeth was equivalent to the Jewish name, Elisheva, Aaron's wife.
Mariam was married and still a virgin according to Hebrew definitions. There is no stable in the NT. There is no inn. There is no cave. The city of David, Bethlehem, was not full of people. It was probably empty except for a few shepherds. (Claiming descent from David was a death sentence in usurper 'King' Herod's regime. No one was even called David in NT times!) No animals, and no stable. But Mariam did not give birth alone. That would have invalidated the genealogy. She needed at least two or three proven honest witnesses.
These false accretions came from Mithraism that was absorbed into Roman religion around the first century. The RC Virgin Birth came from classical pantheism were the gods descended and took human virgins to procreate the demigods.
The Magi did not come at the birth but a year or two later. And there were not three, there were probably hundreds or thousands of Parthian Magi in a caravan that caused the whole of Jerusalem to tremble with fear of another Roman-Parthian war. Parthia had defeated Rome in numerous times in bloody wars and a peace treaty had been made less than 20 years earlier.
And as Paine rightly points out this BVM business adds impossibility to improbability and the illegitimacy of the RC story. In fact it demolishes it. It requires patience and logic to discover and expose lies and falsehoods. A contemporary of Paine was the famous scientist Joseph Priestley. Like many of the scientists of his day, he wrote a huge amount of theology, as in the age of Reason, the logical methodology required was the same. Paine was not up to par on reason. I recommend Priestley's books such as "History of the Corruptions of Christianity" 1782, 'History of early Opinions concerning Jesus Christ'', 'Discourses on Evidences of Revealed Religion' (delivered at the church of the Universalists, Philadelphia 1796 and dedicated to John Adams).
What is important is less the details of history but a willingness to find the truth, for example about the Resurrection and the NT as a whole and act on it.

Tom Paine is considered a hero of American Independence. Born in England, he became an American citizen and then in France during the Revolution was elected to the French Assembly! He wrote a number of books like Common Sense, The Rights of Man, and the Age of Reason, that were best sellers of his time. They still sell well today.
He was raised on the Bible and was able to expose quite a bit of the hypocrisy of the religion of his day. He described himself as a Deist and his rejection of traditional beliefs alienated him from many of his contemporaries.
He was also in conversation with scholars after he wrote this book, so we don't know his final thoughts. He was right to ask questions. But not all of his conclusions are correct. What is useful is the effort to separate the original truth about Christ and the later traditions of men and politicians.
If you consider the so-called Christian traditions of the RC-Protestants as a series of falsehoods overlaid on the biblical account, Paine exposed and removed some of the most pertinent. He said about the Virgin Birth in the Age of Reason that:


Were any girl that is now with child to say, and even if to swear it, that she was gotten with child by a ghost, and an angel told her so, would she be believed?  Certainly she would not.  Why, then, are we to believe the same thing of another girl, whom we never saw, told by nobody knows who, nor when, nor where?  How strange and inconsistent it is, that the same circumstance that would weaken the belief even of a probable story, should be given as a motive for believing this one, that has upon the face of it every token of absolute impossibility and imposture!"

No one would believe her then. No one should believe her today. Yet millions are taught this unbelievable and unprovable claim by a teenager as the foundation for religious belief and obedience to a denomination. Some blasphemously call this girl 'the mother of god.' That is a pagan title of the pagan Queen of Heaven.
Where did the Virgin Birth come from? Why is it held so firmly? The overlay here is ancient and pagan. It is that of the long-held, Greco-Roman gods impregnating human virgins.
How did paganism get mixed up with Christianity? Thank the fourth century imperial church of Emperor Constantine for this mish-mash! Paine is right to show that such assertions don't make sense. They render the improbable impossible. He exposes it as an imposture. He was a free man and spoke his mind. In the Middle Ages the imperial church would have required his life. In fact Paine almost lost his life for his frankness.
The fraudulent doctrine comes by combining (syncretizing) current beliefs to make a new imperial religion acceptable to all. The imperial church and the popes gave 'Christian' names to the pagan gods. But this allegation of an unmarried teenager claiming a Virgin conception by a pagan-style god is at odds with the Bible.
The NT says the opposite. Jesus had a human father. Mariam says to Jesus about Joseph: 'Your father and I have been searching for you.' The disciples say that Jesus is the son of Joseph. Did the popes know better than the real mother and father?
But wasn't Jesus also divine? Where Paine does not analyze it is in the matter of a second birth mentioned to Nikodemus in John 3. This begettal occurred at the baptism of Jesus as an adult human. It was physically seen as 'the form of a dove'.
A further overlay of lies or ignorance that Paine does not speak of is the confusion of Mariam's marital state. Non-Jews of the RCC etc applied the Roman or  even modern concept of what 'betrothal ' is to the NT. Among Hebrews it was different. It is not Engagement. In Hebrew and biblical custom betrothal=Qiddushin= consecration. It means marriage vows and a divorce is needed to break it. So Mariam was married and with child.
It was clearly a miracle to everyone because she was an old woman! She was pregnant at what was definitely a post-menopausal age. 'By (the) holy spirit' means by the grace of God as elsewhere in NT.
Luke 1:36 says both Mariam and her cousin conceived in their old age (gera as in geriatrics) and as Sarah, Rebekah, Hannah and other holy women. Isaiah 7:7 speaks of 65 years but it is not clear whether this also refers to a married virgin.
No text speaks of a 14-year old. The 14-year old 'Mary' comes again from paganized demigod theology. The Romans assumed anyone older than 14 would not be a virgin.
There is a further overlay of ignorance or lies relating to what modern churches take a 'virgin' to be and what virgin meant to the Jews and in the Bible etc. The first century Jewish Christians were called Nazarenes Acts 24:5 and continued into later centuries. They were clear on these matters. Gentiles were confused.  Paine did not explore the sources of these errors although some of the scientist-theologians like Newton, Whiston, Priestley, Boyle did.
The scientific method requires that each step is proven before one moves to deducing a conclusion. That's why Paine needs to be read, checking and verifying with the Bible, other authors and Jewish writings. Some of this is summarized in chapter 15 of the free eBook
https://www.academia.edu/25051668/Jesus_James_Joseph_and_the_past_and_future_Temple_Version_N36